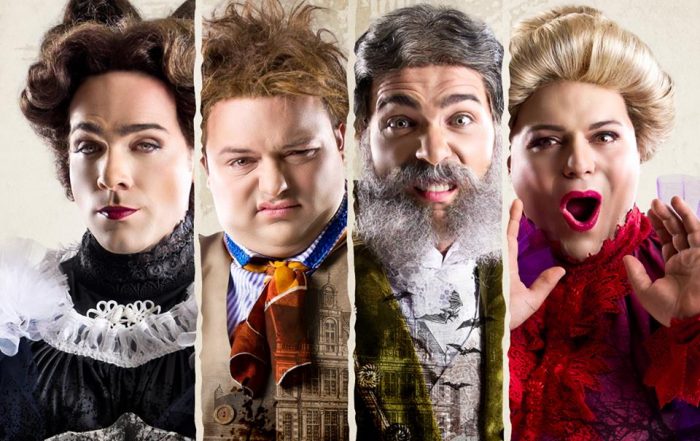 The Mystery of Irma Vep is a play by Charles Ludlam.

It is a satire of several theatrical, literary and film genres, including Victorian melodrama, farce, the ‘penny dreadful’, Wuthering Heights and the Alfred Hitchcock film Rebecca (1940).

A laugh a minute is no exaggeration in what can best be described as a theatre of the ridiculous.

The Mystery of Irma Vep is a satire of several theatrical, literary and film genres, including Victorian melodrama, farce and a unique take on the penny dreadful.

Director Elizma Badenhorst magnificently creates a “silent movie with words” which is larger than life and includes all the fantastical elements of 19th-century Gothic novels.

The cast of eight characters are played by only two actors – Jonathan Roxmouth and Weslee Swain Lauder – who swop characters and costumes no less than 35 times, sometimes in less than 15 seconds. The costume changes form such an integral part of the play that one can construe them as a ninth character.

Badenhorst’s directing is never predictable and, with a surprise around every corner, is delightfully quirky and amusingly peculiar throughout the two-hour play.

Roxmouth (as Jane Twisden and Lord Edgar) is a true shape-shifter with mind-boggling transformations and superb characterisation.  His technique is flawless and he is a master of accents.

The intricate wardrobe design by Pierre du Plessis is jaw-dropping, especially considering the speed at which full costume changes (including wigs) take place.

The scenic design is by Nadine and Louis Minnaar is highly imaginative, yet remarkably user-friendly, considering the chaos it has to accommodate onstage and offstage.

The lighting design by Oliver Hauser is pure magic and the original musical score by Wessel Odendaal strikingly captures every nuance of the play.
This production is certainly worth conquering the cold and will leave you warm with delight.

Jennifer de Klerk: At the end of The Mystery of Irma Vep, a gloriously madcap muddle, you might have grasped sufficient plot lines to tie a granny knot.

Don’t feel bad if you didn’t. The plot is decidedly not your main priority in this ridiculous adventure. Even the script, although it has its moments, is not the mainspring of the madness.

What you need to watch are the deliberate pregnant pauses, the fixed stares, the frozen expressions (horror and shock mostly), the rolling of the eyeballs. You get the picture.

The other aspect to cherish are the changes, virtually seamless, as a character pops in one door and, within seconds, out the other, fully clothed. Aah, the wonders of Velcro and extremely organised and nimble stage managers and dressers. They fully deserved their bow at the end.

The two-hour play (plus interval) is carried by only two males, believe it or not. The cast includes a maid and her madam, a playful peer and his groundsman, an Egyptian hustler and his concubine, a vampire, a werewolf, a mummy and a ghost. At least, she might be a ghost.

Watch the acting, don’t take your eyes off it. Jonathan Roxmouth in a dress is a nightmare, and I mean that in the best possible way. He/she is meant to be; not a woman you would wish to meet in a dark alley or anywhere else. Tall (well, naturally), dark-avised and menacing, he/she does the pregnant pauses, etc, perfectly and maintains a Scottish accent throughout, so good I occasionally had to strain to understand it.

In one door and out the other and even his height seems to shrink. He reappears as Lord Edgar, the playful peer, a perfect English gentleman if you accept the stereotype of English gentlemen being eccentric, naïve, sex-made and stupid. The accent is upper class this time.

Likewise, Weslee Swain Lauder switches characters in an instant, from the baby-faced, a rather likeable idiot groundsman Nicodemus, to the witless Lady Enid confronted with a house of horror and mystery. He/she excels in elaborate costumes and a shocked, frightened expression. He/she has a very expressive tongue. By the way, Lauder dressed and undulating as an Egyptian concubine is a sight to see!

To the sounds of the wind moaning and wolves howling, augmented by eerie music and deliberately fearful lighting, our weird cast encounters their fateful destinies.

The piece is described as a Penny Dreadful and that’s exactly what it is. Relax and go with the flow. You’ll have more fun that way. The director, Elizma Badenhorst, and the cast certainly did, both in the planning and the execution, milking every moment of the ridiculous with malicious intent and perfect timing.

Lesley Stones:  The play is a two-man show with Jonathan Roxmouth and Weslee Swain Lauder playing a panoply of characters. The two of them are having a great time, indulging in silliness as they fool around with slapstick, daft expressions and ludicrously large costumes.

The script is a mishmash of a tale involving an aristocrat and his dead wife, his new wife, a dubious gardener and Jane, a very sinister maid played by Roxmouth, who must be relishing this break from the more serious demands of being South Africa’s most famous singing actor, and can now romp around for the sheer glee of it. He and Lauder meld well together and carry off their characters with crazy aplomb.

While the plot isn’t enough to entertain in itself, the show is elevated by the excellent actions of Roxmouth and Lauder, particularly in scenes like entering an Egyptian tomb, where their physical antics erupt with comedy.

It’s over the top for sure.

FEEL LIKE AN evening of manners and frippery, ghosts and howling wolves, complicated hairstyles and seriously big dresses? The Mystery of Irma Vep has something for everyone, and it’s a slick, quick and deliciously fine production that will keep you laughing for months.

The Pieter Toerien theatre has become known for staging crisp and fabulous farce, but this piece of theatre ramps things up considerably. Mashing together the notion of the Victorian penny dreadful with Charles Ludlam’s inimitable approach to the ridiculous, in an utterly over the top two-hander, which offers not a little sleight of hand magic in the wardrobe department, The Mystery of Irma Vep is utterly brilliant. The performances of Weslee Swain Lauder and Jonathan Roxmouth beg comparison with those of no less than Michael Caine and Sir Lawrence Olivier in the fabulous 1970s film, Sleuth.

It’s a mad little yarn involving many things that go bump in the night, as well as a maid of a Victorian manor who has a couple of unexplainable talents and a hairdo to match. She’s obliged to serve the manor’s new mistress, one Lady Edna, of whom she isn’t awfully fond. There’s a painting with a weird aura, a werewolf or two, an oddly sinister ragamuffin manservant with a wooden leg called Nicodemus as well as some anagrams to spice things up. And of course, as the genre demands, there’s a foray into Egyptian tombs, a couple of jagged chases around the auditorium, and a delicious peppering of sound effects. Not to forget an unforgettably terrible improvisation for dulcimer and recorder which is so bad that it is fabulous, and some wigs and costumes that have so much personality, they should be listed on the cast list. But that’s not all: Lady Edna’s facial expression in times of great horror blends faux high drama with the ludicrous so finely, it deserves programme credits of its own. In short, this production is exactly what the doctor ordered.

Think of Mary Shelley’s Dracula, with the earnestness contorted into utmost hilarity, and the characters are drawn at the bizarre and pants-wettingly funny tilt of caricatures emphasised to the hilt, and you might get a sense of the fun that is to be had as you discover the unrolling mystery of Irma Vep. But be warned: you will be lost in your own laughter way before the plot grabs you by its own tale. It’s a convoluted one, but it doesn’t matter. The work is so crisply constructed, and utterly flawless, it just doesn’t miss a beat. Clocking in at about ten minutes too long, it’s a theatrical experience in which you may find your face begins to ache as a result of too much laughter, but the funny never stops.