Pieter Toerien presents The Imperial Ice Stars in their breath-taking, brand new production of SWAN LAKE ON ICE, with music by Russian composer Pyotr Ilyich Tchaikovsky, in the intimate setting of the theatre!

Five Star Entertainment!
“The beginning of a new ice age … a brilliant spectacle in the true sense of the word.”  – Sunday Express UK

Over three million people across five continents have been swept to their feet by The Imperial Ice Stars‘ jaw-dropping performances, uniquely performed on an ice rink created on stage!

THE IMPERIAL ICE STARS are renowned for marrying well-loved classical scores with breath-taking choreography and romantic narrative, creating a fusion of adrenaline-rich ice dancing and dramatic performance. During the last decade, the award-winning troupe has enthralled audiences in 27 countries across five continents, gaining a worldwide following and establishing an unrivalled reputation for their sophisticated portrayals of classic works.  Their previous world tours (CINDERELLA ON ICE, SLEEPING BEAUTY ON ICE, SWAN LAKE ON ICE and THE NUTCRACKER ON ICE) have been greeted with nightly standing ovations and five-star reviews. THE IMPERIAL ICE STARS last performed in South Africa from December 2013 to February 2014 with THE SLEEPING BEAUTY ON ICE, garnering outstanding reviews and raves from local audiences.

This new production of SWAN LAKE ON ICE has crisscrossed the globe, performing at some of the world’s most prestigious venues, including London’s Royal Albert Hall, Singapore’s Marina Bay Sands Grand Theatre, Sydney’s Lyric Theatre and an outdoor season at the Sabatini Palace Gardens in Madrid. Whether you’ve seen THE IMPERIAL ICE STARS’ SWAN LAKE ON ICE before or have yet to experience the thrill of world-class ice skating in the intimacy of the theatre, this dramatic new ice interpretation of one of the most popular ballets will have you on the very edge of your seat. 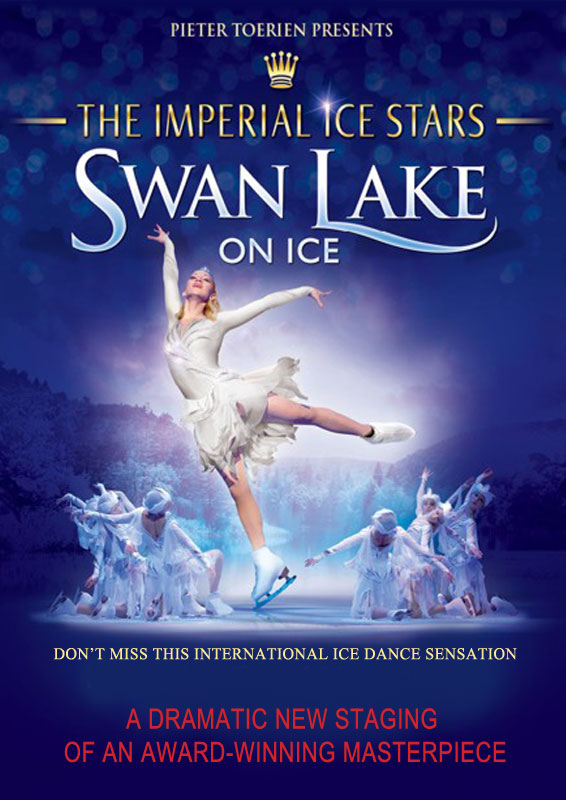 Singin’ in the Rain
Scroll to top