So what is this “This is NOT a musical” Bohemian Rhapsody all about?

It’s NOT a musical, it’s NOT a Freddy Mercury Tribute show! So what is it?

As an introduction to his latest play, Bohemian Rhapsody-The Untold Story, which opens (tonight) in Pieter Toerien’s Studio Theatre, the playwright and performer, Robert Fridjhon, insists that people must not think it’s a musical or an extravaganza.

“It’s a drama, with some funny moments, but a drama.”

The play is about trying to make sense of the lyrics of the Queen song in the title that remains one of the greatest-selling hits of all time, and yet, Queen were famously secretive about the songs obscure significance. “That’s what tickled me,” says the writer in Fridjhon and even though the enigmatic story and hidden meaning have remained shrouded in mystery for over 40 years, he feels he has found some kind of answer. “It’s my version of the song,” he notes as he explains that he has been very careful with this story because it is on such hallowed ground that he is walking.

“I’m not implicating Freddy (Mercury) in a crime,” he says with a wry yet wicked smile as he acknowledges that Queen have always been his favourite rock band, but everyone has always speculated about the real meaning of that song. “He was quite close with a journalist who wrote a biography of the group, but he couldn’t prize it out of him.”

Nor are any of the living band members saying anything if they even know!

Who doesn’t love this kind of intrigue? And that’s what Fridjhon is playing with.

“It’s really about telling stories,” he says. This is gritty London, 1970. It’s Berkoff meets Guy Ritchie in a twisted thriller that will have you wondering who pulled the trigger, right until the very end. And with director Alan Swerdlow holding his hand, they seem ready to scare their audiences with wit and thrill.

It’s a daunting thing, writing and performing solo. It doesn’t come easy, but Fridjhon always walks around with a notebook and is a keen people watcher-all in the service of storytelling. Once he has an idea, it’s a solo process, although his (Fiancee) Bronwyn, also and actress, is the first to read and critique it. But that’s after the first draft as he doesn’t like to be critiqued while he’s still playing with the idea and the words to tell this particular tale.

One of the things he plays with is originality, something Mercury was obsessed with. “Off stage,” tells Fridjhon, “he was a kind of old-school, polite kind and caring person. Also very shy,” he adds. But, of course, we all know the larger-than-life stage persona. So Fridjhon’s tale is loosely spotlighting an art teacher who starts copying artists, but so well, that others start buying it and, before he knows it, he is in trouble – as these kinds of dabblings go.

“It has a kind of Lock, Stock and Two Smoking Barrels feel, with some characters, the language included, quite hardcore,” he suggests, hence a no 16 and younger age restriction.

It’s not his first writing effort, but one he probably feels most “quietly” confident about.

“It’s a heartfelt effort,” he says and with Swerdlow guiding him, he feels he has the backing and support. “When Alan first read the script, he said it’s a good book,” says Fridjhon to illustrate that he isn’t precious about his words. It’s there to serve the story and once we’re in rehearsal, that’s when the hard work begins. “this is both a period of percolation and panic,” is how he best paints the picture of the process.

But to return to the actual play, please, stresses Fridjhon, don’t wonder about him singing.   “I can’t sing,” he reiterates.

It’s a solo dramatic storytelling show, a fictionalised version of unravelling the much-discussed lyrics (and their meaning) of Bohemian Rhapsody.

He promises die-hard Mercury fans that he is writing with as much depth as the artist and their music demand.

Bohemian Rhapsody contains strong language and violent imagery. It is not suitable for sensitive patrons, or anyone under the age of 16. 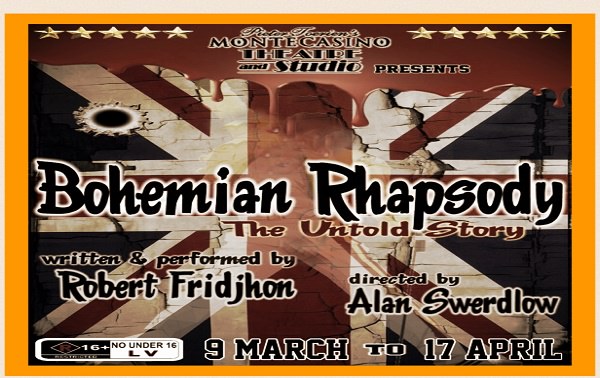 What is it that we’re living for? Applause, Applause!