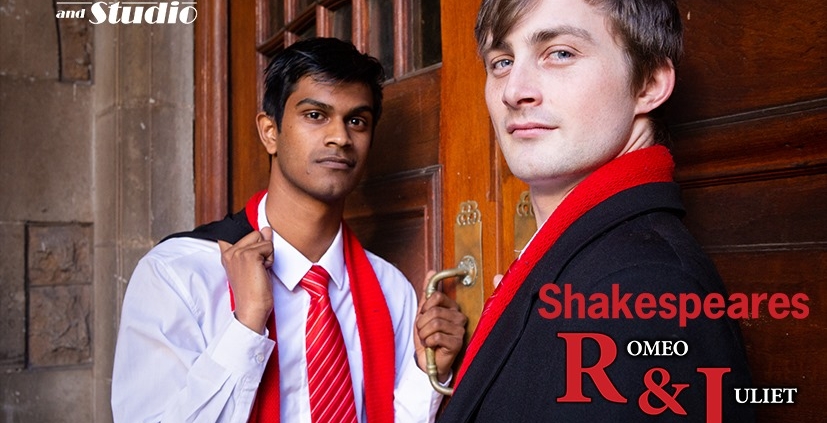 A risqué Romeo and Juliet

Lesley Stones: You have to admire the pluck of theatrical producers Abrahamse & Meyer for not taking the easy route.

Their latest production is Shakespeare’s R&J, and it’s both risky and risqué. Risky in that Shakespeare isn’t a guaranteed crowd puller, and risqué in that this version has a strong gay element that’s already seen some teachers cancel their planned school visits.

The eternal love story is now set in a Catholic boys’ boarding school in the 1950s, where the young scholars get hold of a copy of Romeo and Juliet and act it out at night.

The clever adaptation by Joe Calarco starts innocuously, with the daily rigmaroles at school punctuated by the insistent bell. Lessons spent conjugating verbs or reading from bizarre old-fashioned texts about the different roles of men and women. (Hopefully to set the scene in the 1950s, rather than to reflect what boarding school boys might still be taught.)

Blackboards swing over to become church iconography and desks and benches summon up the classroom setting. Then come playful scraps in a dormitory of bunk beds and the boyish breaking of rules. By now the actors have established their traits, with Matthew Baldwin standing out as the natural choice for Romeo, with his floppy romantic hair, lovesick swooning and a schoolboy eagerness to capture the fractures of his heart in an ever-present notebook.

The four actors play out highlights from Shakespeare’s script that give us all the action without any of the periphery. Simple props like blankets and bedside cabinets are all they have for their impromptu drama, so sheets turn into a nurse’s headdress and bunkbeds double for the balcony window from where Juliet is wooed.

Around that, Calarco has built a current of awakening sexuality that sees Baldwin’s schoolboy falling for his classmate (Tailyn Ramsamy) as much as his Romeo is falling for Ramsamy’s Juliet. That simmering and illicit infatuation angers the other boys, played by Dean Balie and Jeremy Richard, heaping up the tension as they wonder whether to curtail the heated late-night drama.

Shakespeare’s undiluted text fills the script, but a strange thing happens. In the hands and mouths of these supposed Catholic schoolboys, the words become more comprehensible than has been achieved in many other versions that I’ve seen. The innuendos are highlighted with schoolboy jests and the passions and anger portrayed vividly.

All four are excellent in their parts, with Ramsamy softening his features and voice to give Juliet a certain shyness. Richard reminds you what a good actor he is with his portrayal of The Nurse, when he suddenly swings from the sullen schoolboy angered by his classmates to become the nurse again, with his voice and demeanour changing instantly. Dean Balie is in total command as Mercutio and Friar Lawrence, with the only downside being that his skill and maturity suddenly seem disproportionate to the fact that he’s supposed to be a schoolboy.

Director Fred Abrahamse also designed the set and its excellent lighting, while Marcel Meyer worked as the voice and verse coach and costume designer. They’re created a winning production. The words zing into life, the actors capture the boys with all their young bravado and uncertainty, and Calarco’s adaptation gives you the right amount of traditional Shakespeare with a freshness that give you new insights into the meaning.

As for the gayness, it might deter stodgy teachers, but it works superbly.

Evita; EXPOSED! Pieter-Dirk Uys in a Q&A
Scroll to top