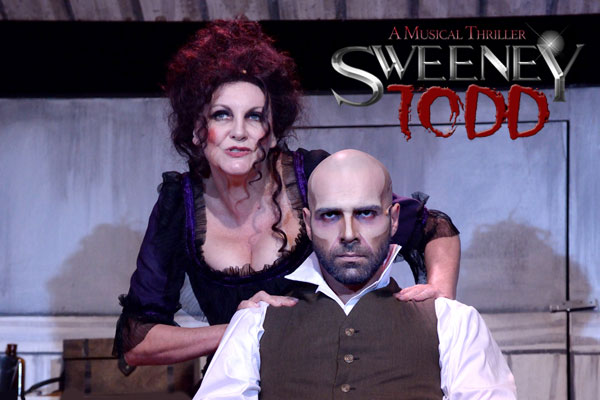 Critical Acclaim for the Pieter Toerien and KickstArt production of SWEENEY TODD: THE DEMON BARBER OF FLEET STREET:

“This South African production proudly takes its place as a worthy, timely and brilliant local staging of a difficult and complicated story.

I have seen overseas productions of Stephen Sondheim’s unsettling pitch dark musica,l that often takes you to places you don’t want to go to, as well as the Tim Burton film version. There are no hummable tunes, no hit songs, no feet-tapping audience-friendly melodies, but believe me, you will walk out of Steven Stead’s interpretation in awe of the power of its musical score and fascinating lyrics loaded with subtext. It again proves that our local theatre scene is thriving with unparalleled talent which comes to full fruition here.

This tale of greed, hate, revenge and horror takes place in London around 1878 in Fleet Street and concerns a creepy barber, played to perfection by the authoritative Jonathan Roxmouth, (he doesn’t seem able to put a foot wrong in whichever role he tackles) who has been falsely accused of murder years ago and is looking for his daughter. He plans revenge on Judge Turpin who abused her (the staging of this rape is horrific!) and when his path crosses with that of the evil judge, opens a barber shop above a pie shop run by the eccentric and fearless Mrs Lovett to take revenge.

Two haunted and lonely, evil souls immediately recognize each other as they find solace in one another and start a friendship in which many people are murdered with their bodies used in pies. The community eats this “delicacy” with relish without realizing what is happening right under the noses.

The set has been constructed and is used with sheer brilliance. The way each inch of the stage is utilized to open up this horrifying story, the cramped-up spaces and the claustrophobia it evokes, has a numbing effect on the audience. It is especially the barber shop, which opens and closes on the first floor like the lid of a coffin that astounds. Also of note are the glowing embers in the oven in which human flesh is cooked which serve as a constant reminder of the atrocities taking place, not forgetting the nonchalant relish of the unstable Mrs Lovett, who even sits and knits on the steps as the meat is being cooked. It hits you straight between the eyes.

The scenes in an asylum is as horrifying but fascinating and overpowering as anything you’ve ever seen on Pieter Toerien’s Montecasino stage. The staging is vivid, dazzling and unforgettable.

But in the end it is the skilful and ably-directed cast, the different roles they take on, each with his or her own personality, and the horrifying glee with which the characters go about their business, (those spookily lit faces!) that resonates with the audience.

Scene stealers include Cameron Botha as Anthony Hope as well as Sanli Jooste as the hapless Johanna. But of course a clear audience favourite, coupled with Roxmouth’s fascinating interpretation of the barber with a forehead as big as his barber shop, is the flamboyant but perfectly controlled Charon Williams-Ross as Mrs Lovett. Just to hear her imitating a seagull had the audience in stitches. What a performance!

Sweeny Todd, described as a musical thriller (I would call it a Grand Guignol black musical comedy), is a superb, unforgettable production, seamlessly exploring the mental ambiguities of the characters as well as the darkness of the human soul. It is moody, darkly amusing and hypnotizing.

See it at all costs! It is mesmerizing!”

Music and Lyrics by Stephen Sondheim.
Book by Hugh Wheeler.

“Swing you razor wide!”- The word on the street!