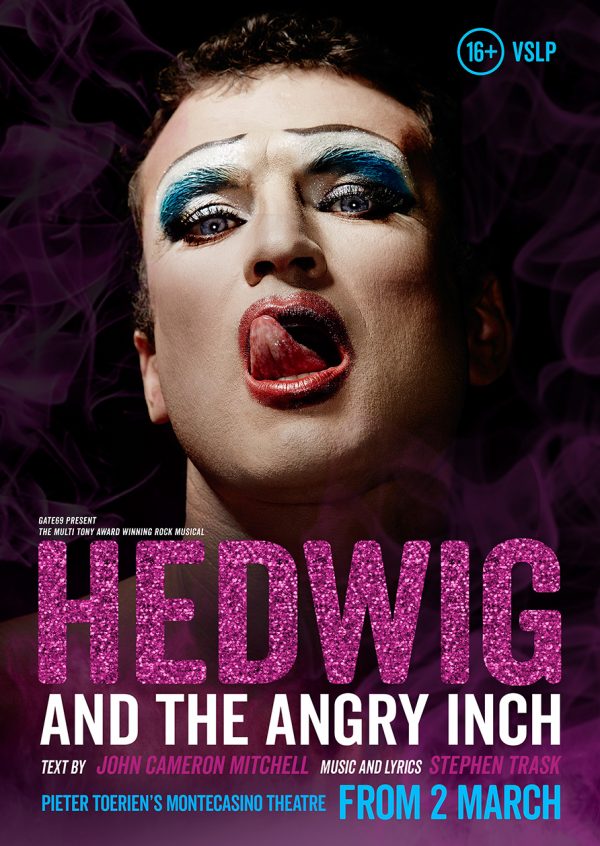 Hedwig and the Angry Inch

Music and lyrics by Stephen Trask

After its sold-out season in Cape Town, this edgy, multi-award-winning punk-rock musical will hit Johannesburg like a sledgehammer!

Hedwig and the Angry Inch is a brilliantly innovative, heart-breaking and wickedly funny musical sensation. With a pulsing score and electrifying performances, it tells the story of one of the most unique characters ever to hit the stage. The plot revolves around Hedwig, a transgender singer from East Berlin. In order to marry his American boyfriend and escape the confines of an oppressive state, Hansel undergoes a sex change operation, becomes Hedwig, marries and flees. The operation is botched, the American leaves her, and she is broke. She subsequently develops a relationship with a younger man, Tommy, becoming his mentor and musical collaborator. Tommy steals her music and is rocketed to stardom, leaving Hedwig behind.

The musical follows Hedwig, her roadie, Yitzhak, and their fictional rock band, The Angry Inch, as they shadow Tommy’s tour while exploring Hedwig’s past and her complex gender identity.

The ingenious musical score brought to life on stage by a live rock ‘n’ roll band, is steeped in the androgynous 1970’s glam rock style of David Bowie as well as the work of John Lennon and Iggy Pop.

Hedwig and the Angry Inch is a trailblazing, landmark musical;  undoubtedly ahead of its time.

This production stars the brilliant Paul du Toit (The Rocky Horror Show, Same Time Next Year, Binnelanders, Backstage) and Genna Galloway (Grease, Showboat, Noah of Cape Town) and is under direction of Elizma Badenhorst (I Love You, You’re Perfect, Now Change, The Mystery of Irma Vep, A Christmas Carol).

Hedwig and the Angry Inch is on the boards from 2 March 2018 at Pieter Toerien’s Montecasino Theatre.

Running time 90mins with no intermission.

THE SOUND OF MUSIC