Internationally acclaimed Hamlet returns to South Africa for limited engagements in Cape Town and Joburg before heading off to the USA.

After playing to 5-star reviews and standing ovations at the National Arts Festival and in Europe, Pieter Toerien proudly presents a limited season of Abrahamse & Meyer’s internationally acclaimed Hamlet at Montecasino in May.

The Abrahamse & Meyer production takes its inspiration from one of the earliest recorded performances of Hamlet during Shakespeare’s lifetime. In 1608, off the East Coast of South Africa, the crew of the East India ship, Red Dragon, performed Hamlet aboard their ship. In his log, on 31 March 1608, Captain Keeling noted: “I invited Captain Hawkins to a fish dinner, and had Hamlet acted aboard me, which I permit to keep my people from idleness and unlawful games or sleep.”

This production of Hamlet re-imagines Shakespeare’s most iconic play within the context of the historic 1608 performance aboard The Red Dragon as a play within a play, utilising a cast of only 6 actors playing 6 Jacobean sailors who, in turn, play all the parts in Shakespeare’s Hamlet. Critics have hailed it as a multi-sensory experience… imbued with wonder and as daring, modern, exciting and topical.

The production stars Marcel Meyer in the title role, with the veteran Shakespearean actor, Michael Richard taking the role of King Claudius. Dean Balie doubles as Polonius and Horatio with Jeremy Richard as Laertes, Matthew Baldwin as Ophelia and Callum Tilbury in the role of Queen Gertrude. 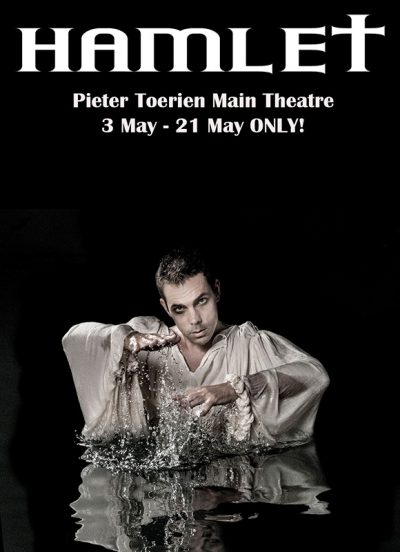 Times are different per day, so please check the schedule.

R120 for Seniors and Students

Other discounts for Edgars Club, DARTS, Fanatics and Randgo

“From the amazing pool of water surrounding the ‘ship’ to a very real, looming spectre, the company creates a multi-sensory experience that takes an already very visceral and important classical play and imbues it with wonder and awe enough for a contemporary audience.” – Binwe Adebayo – City Press

Abrahamse & Meyer Productions in collaboration with the National Arts Festival Grahamstown, Artscape, The Market Theatre, the Fugard and the Maynardville Open-Air Theatre have produced some of the most successful Shakespeare productions in South Africa. These productions have proved immensely popular with the public, critics, school teachers and learners and have collectively garnered no less than 13 Fleur du Cap Theatre Award Nominations. In the past five years these productions have been presented in no less than 20 different seasons on two continents [Africa and Europe], in three provinces [Eastern Cape, Western Cape and Gauteng], in six cities [Grahamstown, Cape Town, Pretoria, Johannesburg, Craiova and Râmincu-Vâlcea] with further tours being set up across Europe in 2016.

Respected theatre-critic Christina Kennedy wrote: “It is sometimes debated – often among young people – what relevance Shakespeare has to SA in the here and now. This is why passionate young thespians, such as Fred Abrahamse and Marcel Meyer, who are hell-bent of making Shakespeare daring, modern, exciting and topical, deserve some sort of special award. Abrahamse and his brave young cast should be applauded for bringing a new, synapse-firing incarnation of a well-known text to local audiences.”

The Tragedy of Richard III
“Fred Abrahamse’s RICHARD III is the best mainstream production of a Shakespeare that I have seen for at least seven or eight years. An accessible, deeply engrossing production, this is by far the best-spoken Shakespeare I have seen produced in this city. It is a stunning achievement.” – Peter Tromp THE NEXT 48 HOURS

Shakespeare’s R&J
“It should be mandatory viewing for young theatregoers. This astonishing production of ROMEO & JULIET gives courage to local theatre. This quality of young Shakespeareans on our stages refutes any belief that work ethic and skill in South Africa is dwindling. This immensely satisfying play is up there amongst the best this country has seen in a long while.” – Robyn Sassens ARTSLINK and THE JEWISH REPORT

A Midsummer Night’s Dream
“This production tears Shakespeare off the pages and into a riotous romp for all to enjoy. It has a freshness that will be appreciated by the Blackberry generation. Innovative set designs, sumptuously designed costumes and a highly accomplished cast ensure that both dreamers and their dreams outlast a midsummer night” – Tracey Saunders, THE CAPE TIMES

Hamlet
“Shakespeare’s Hamlet, as produced by Fred Abrahamse and Marcel Meyer, is of world-class standard and the cast of Marcel Meyer, Nicholas Dallas, Callum Tilbury, Dean Balie, Jeremy Richard and Mathew Baldwin all deserve Oscars; they are right up to the standard of those actors who perform at the Old Vic and indeed the Royal Shakespeare Company.” – Peter Grist, THE ANNOUNCER

Othello
“Perfection! One of the top five Shakespeare productions this reviewer has ever seen. A wonderful evening in the theatre.” DIE BURGER

“The Abrahamse/Meyer partnership is renowned for staging award-winning epic productions in Cape Town (Desire Under The Elms,The Milk Train Doesn’t Stop Here Anymore and The Tragedy of Richard III to name a few) and for good reason – a show produced by this dynamic duo is bound to be done with flair and finesse, and this is once again the case with Othello.” – THEATRE SCENE, CAPE TOWN

“Helmed by the A-team of Fred Abrahamse [director] and Charl-Johan Lingenfelder [composer], with gorgeous costumes by the multi-talented Marcel Meyer who also plays Iago – Shakespeare at Maynardville is another of those quintessential Cape Town activities you should do at least once in your lifetime.” – THE WEEKEND ARGUS

“This excellent production is well worth your while. What’s more, it is a gift in its interpretation and ideal for this year’s matric learners.” – BIZZ COMMUNITY

Fred Abrahamse graduated from UCT Drama School and started his career at The People’s Space, as a founding member of Troupe Theatre Company. He was Artistic Director of the Baxter Theatre and is also a well-respected producer and designer. His theatre involvement spans over 30 years and more than 100 professional productions including dramas, operas, musicals, cabaret and several community theatre projects.

In 2006 Abrahamse and Meyer joined forces, founding ABRAHAMSE & MEYER PRODUCTIONS. The company’s productions include the award-winning South African première of Stephen Sondheim’s Assassins; Tennessee Williams’ Kingdom of Earth, The Milk Train Doesn’t Stop Here Anymore, The Day on Which a Man Dies, Stairs to the Roof and One Arm; William Shakespeare’s Hamlet, The Tragedy of Richard III, A Midsummer Night’s Dream and Othello, as well as the South African première of Joe Calarco’s Shakespeare’s R&J; an award-winning revival of Sir Noël Coward’s Private Lives; Eugene O’Neill’s Desire Under the Elms and the world première of two original South African musicals, In Briefs and Bangbroek Mountain.

In April 2014 the company made their European debut, when their production of The Tragedy of Richard III opened to standing ovations and huge critical acclaim at the 9th International Shakespeare Festival in Romania.

In September 2014 the company returned to the USA to present Yukio Mishima’s The Lady Aoi at the Provincetown Tennessee Williams Theatre Festival and then created the hugely acclaimed first professional revival of William’s early play Stairs to the Roof in Williams’ hometown, St. Louis with an all American Theatre company. Stairs to the Roof received nominated for 4 Theatre Circle Awards in St. Louis, for Best Set Design and Best Costume Design for Meyer and Best Director for Abrahamse.

In 2015 the company was invited back to the USA to present a double bill of The Milk Train Doesn’t Stop Here Anymore and The Day on Which a Man Dies as part of the 10th anniversary Provincetown Tennessee Williams Festival.

International dates in 2016 include Hamlet at the 10th International Shakespeare Festival in Craiova and a three city tour of the USA with Desire Under the Elms.

The Play That Goes Wrong