Somehow there’s nothing like the clean slate feeling that the start of a new year brings, however fleeting!

Our wonderful ‘feel-good’, ‘love will triumph’ musical ANNIE has closed and we thank you for your wonderful support and know that all who saw it couldn’t help but be touched by the wonderful story and the incredibly talented cast of the very young and the more experienced. And then there were those adorable dogs! A testament to the incredible talent we are blessed with in this country if nothing else.

In Johannesburg, the equally feel good ‘JOSEPH and the Amazing Technicolor Dreamcoat’ continues to entertain and wow the crowds keeping that special tradition of introducing a new generation to the wonders of musical theatre! The baton continues to be passed on, 50 years down the line!

The Jo’burg run ends 29th January, then moves on to The Port Elizabeth Opera House for 2 weeks, then back to The Theatre on The Bay until early April after which a 3 City New Zealand tour awaits. By now a guaranteed high-class experience for our friends so very far South East!

On a smaller scale, but by no means smaller, the King of Comedy, Mr Alan Committe finishes off his new show Laughing Matters at the Theatre on The Bay in Cape Town before taking Johannesburg by storm again with his hysterical look at relationships in the brilliant Love Factually! A sort of Defending the Caveman for the 21st century if you will. It’s not to be missed.

Robert Fridjhon has written another exquisite piece of comedy with Sherlock Holmes and the curse of the Queen’s diamond. A mad-cap adventure that is pure theatrical magic! This masterpiece finishes on Sunday and has enjoyed a sold out season! HRH Queen Victoria et al then take the overnight coach to Cape Town for a brief stage appearance at The Theatre on The Bay from 18-28 January. Do pop in!

2017 then is getting off to an amazing start with laughter and incredible showcases of local talent! The analysts say we’re going to need a bit of laughter in our lives, so come to the theatre and be forearmed!

We have a lot more exciting theatre lined up for you this year, loads of it, in fact, look out for our Theatrics Seasons, sign up and sit back and enjoy another year of world class theatre on your doorstep!

We thank you for your support and look forward to sharing another great year with you!

All the best for 2017 and let’s make it a theatrical one! 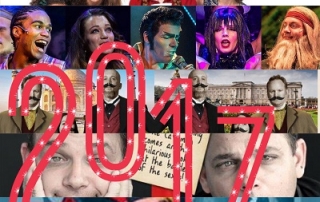 “This ain’t your granny’s Sherlock Holmes”