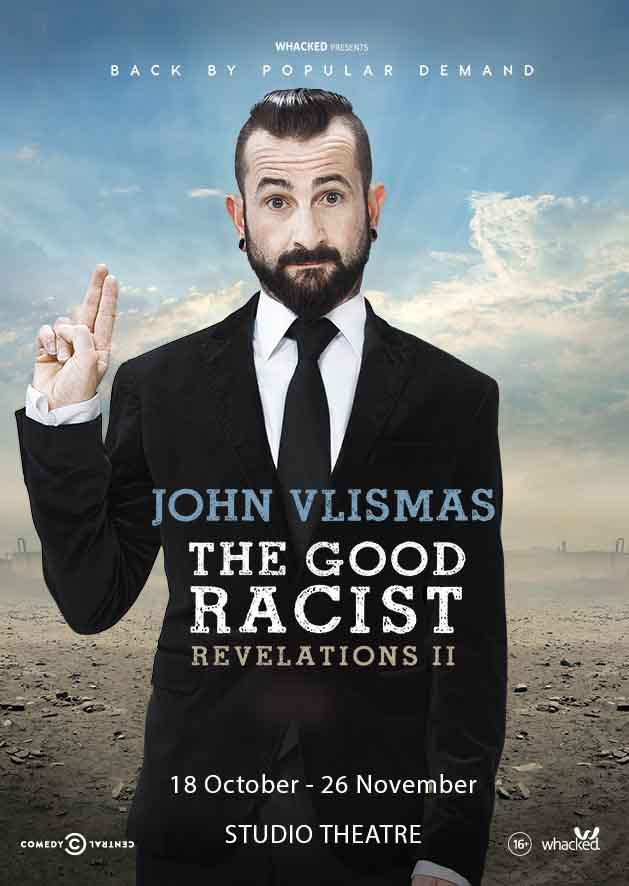 Back by popular demand, one of South Africa’s most acclaimed and outspoken comedians, John Vlismas, is bringing his sold-out show “The Good Racist”, to The Pieter Toerien Studio Theatre. From 18th October – 26th November, Johannesburg audiences will come face to face with some of the uncomfortable truths of our society as the award-winning comic pulls no punches – the way only Vlismas can.

“The Good Racist”, sees Vlismas at his most frank, and arguably, his best. Far removed from your typical “ha-ha” jokes, the show leaves the audience with many “a-ha” moments as they are forced to ponder on issues such as the Voortrekkers (who were apparently not saints), Mahatma Gandhi (who drank urine and slept with virgins), Shaka (a Hitler in his own right) and Mugabe (who may or may not have some valid points about Britain).

“We tend to rely on ‘Chappie paper’ facts whenever we attack each other…maybe our common enemy is ignorance?” says Vlismas, who spent nine months doing research for this show, and read over a dozen books as reference. “Whichever way you look at it, we have come a long way as a country – whether we’re heading in the right direction is up for debate.”

“It gives us the greatest pleasure to bring our guests the very best in live entertainment. ‘”The Good Racist’, which can best be described as a TED-talk laced with humour, is definitely not to be missed!”

“Those who want to trace the modern South African back to our forefathers – leaving no stone (or man) unturned – will not be disappointed by this genius show. It is as intelligent as it is brilliantly funny and brutally honest, and will leave you with much to think about for months to come.”

Please note that The Studio Theatre has NO disabled facilities. There are STAIRS to climb.

The performance runs 1hour 5mins with no interval.

There is no age restriction but babies in arms or prams are not permitted.

There are great discounts on offer for groups 10+ and Charities/Fund Raising. Please contact Geraldine at geraldine@montetheatre.co.za or 011 511 1988

Other discounts on offer for EDGARS CLUB, DARTS and FANATICS CLUB