Two of South Africa’s best-loved entertainers join forces for the very first time to create a truly memorable musical show. The ever-popular André Schwartz and Coenie de Villiers have collaborated to bring us the heartfelt GRENSLOOS. Says Coenie: “For years we’ve been threatening to create a show together. This is it!”

“There are actually four of us on stage, the “other two” being twin grand pianos because we both play piano during the performance. Everybody knows that André is a singer of international renown but not everyone realizes that he is also a whizz behind the keyboard,” declares Coenie. “It’s also a quieter and more introspective musical show.”

GRENSLOOS means “without borders”, as well as not weeping about something. But why this title? “We wanted to create an experience that would cross boundaries and borders,” says André. “There are wonderful but less well-known songs from France and Holland in the show, and of course also from South Africa. We sing some of our own compositions as well, a few of which have never been heard before by our fans. We aim to present a show without compromises – without borders, as it were – one never knows when the chance will come around again.”

During the concert André and Coenie also reminisce over their first recordings – some of which go back all the way to the seventies. “It’s a bit like reviewing the faded photos of one’s matric farewell,” they joke. “Hopefully both of us have matured over the years. Now we have the confidence to do the things we have always wanted to do. And, of course, it’s great working together. We should have done it years ago!”
Coenie and André grow serious for a moment: “We think ours is a positive gig. We don’t bemoan our lot in life, or cry about anything. It’s incredible to discover the spectrum of songs that conveys precisely this affirmative message of live and let live. Not only across the borders of countries, but also spanning the divides between people, cultures and genders. When all is said and done, people remain just that: people.”

Come and celebrate life in word and song with two of South Africa’s foremost entertainers.

The debut presentation of GRENSLOOS took place at a sold-out performance at the Atterbury Theatre in Pretoria on the 28th of April, during which the audience was carried away. “It was great receiving a standing ovation in the middle of the show,” both musicians laugh.

Both André and Coenie are looking forward to present GRENSLOOS at the magnificent Theatre on The Bay in Cape Town. Both believe it to be one of the most beautiful venues in the country. “And, of course, it’s next to one of the most stunning beaches in the world! 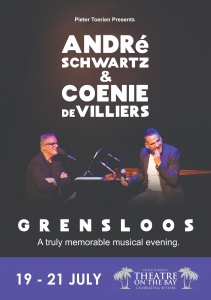