An Interview with director, Marthinus Basson

Brilliant South African theatre maker, Marthinus Basson has directed A Cock & Bull Story several times. The first was in 1985, the same year it premiered in London. Basson is again directing (and designing) the intense and superbly written two-hander at Theatre on the Bay. It is on from Tuesday (May 17) to Saturday (May 28), performed by Dean-John Smith and Edwin van der Walt. Written by British playwrights Richard Zajdlic and Richard Crowe, the text has been localised for this production and is set in contemporary suburban Cape Town in Boston, Goodwood.

The script has been adapted by film director Quentin Krog and actor Geon Nel. The setting is transposed to Boston, an area which abuts Grand West. Smith plays TJ – an up and coming boxer. It the evening of an important match – which could make his career. He is waiting in a locker room of the local community gym, for his friend Jaco (van der Walt), who preps him mentally and physically before his fights. When Jaco arrives late, the tension builds –with the two men sparring and jabbing (physically and verbally). Multiple themes including gender, sexuality, male friendship – are thrashed out. It is a dialogue which rips back and forth between the men.

The CapeRobyn in conversation with Marthinus Basson on A Cock & Bull Story:

Director of A Cock & Bull Story

Have you made significant changes to the script?Marthinus: We cleared all changes with the two playwrights who are understandably very protective of the script they work shopped for eight months as two young actors in the early 1980’s. But setting it in a local contemporary reality needs names places the kind of slang that would root it down and fit two local characters and so demanded some tweaking.

Is the setting transferred to contemporary suburban Cape Town?

Marthinus:To use the tensions that could erupt between two friends from very different cultural and racial, but similar socio-economic backgrounds, we decided to set it in Boston / Goodwood with reference to the gang experiences I observed first hand in that area during my time as a photographer of strippers for a club franchise during my early jobless 2000s.

More information about your gig as a photographer of strippers?

Marthinus: Desperate times after leaving CAPAB with a severance package of R20, 000 after 20 years service. But I had a camera. The franchise was big and did both ladies nights and the usual. It was at a time where the Russian & Chinese Mafia moved in and it was an education to see the new sharks and the locals in the crowd with their slipstream of pilot-fish operating.

I am unfamiliar with Boston, Goodwood. Is Boston an actual area in Goodwood and is it near GrandWest?

Marthinus: Boston is a transitional area leading into Goodwood. That area has a good racial mix and added believability to TJ and Jaco being buddies. It is little known enough to provide some leeway for invention as far as clubs etc…

Marthinus I think we are in an interesting phase in our history where a white underclass can no longer rely on a government backing them and a coloured community is establishing a solid middle class. Boxing here (as I found in Belgium where we trained at the GOLDEN GLOVES club and I witnessed several fights with boxers being driven from Bosnia, 5 in a car, fighting for money, being knocked out and driven back on the same night) has always been a way for certain young people to escape their realities – money -fame, etc. Pretty much the dreams of the two characters. Boxing was little seen here on TV lately but is back again. SA now also has a GOLDEN GLOVES and ironically, we are playing in Monte Casino after the Cape Town run where the big bouts now take place. So yes. Now.

English and Afrikaans is used?

Marthinus: The language moves freely between English and Afrikaans patois, the way people speak in real life with some baie creative metaphors, boasts and insults.

You have directed and designed the play. Is it set in a locker room of a local gym?

Marthinus: Both young men come from a trying financial background and boxing is a way out to a better life for TJ and Jaco. The set is a suggested rundown locker room /community hall with references to a boxing ring. At some point in the set becomes a weapon in the fight between the two friends.

I was amazed that the play was first staged in London in May 1985. With its dissecting of themes of gender, sexuality, male friendship etc – it feels so contemporary and fresh.

Marthinus: I did the production here in 1985 with Jamie Bartlett and David Butler in its original Cockney, then in Belgium in 2003 set in the dockyards of Ostend with a particular form of Flemish dockyard slang and now in Goodwood / Boston. It always remains fresh and with every set of actors, it transforms into something thrillingly new and vital. I love the way it speaks with such insight about the value and limits of friendship with much humour and joy, but unsparingly plumb the despair of loss and betrayal using such limited characters.

Where in Belgium and how did that come about?

Marthinus: I got the play from its then agent Gordon Dickerson who brought it to the then CAPAB Company Manager Melvyn Minnaar. I just started directing and it was my 3rd play. It opened in the Arena and played 150 performances in Cape Town, Johannesburg, Durban and Port Elizabeth. The play pretty much established Jamie Bartlett’s career. I worked in Belgium on and off for nine months after I was retrenched at CAPAB before it became Artscape.

This the third time you are doing the play but the first time with a localised version of the script?

Marthinus: I made the play for ARCA Theatre in Gent with two brilliant Belgian actors and it travelled around Flanders. I used the play for teaching purposes and adapted it several times taking into consideration who the students were. Dean made it possible to look at another community and that shaped this production. It was readapted from the one I did with Krog and Nel.

Comment about staging this play now in Cape Town 2016 and your actors Edwin van der Walt and Dean John Smith?

Marthinus: The play sets enormously high demands for its performers. Smith and Van der Walt are two of the most gifted actors of their generation. Both were students at Stellenbosch (where I taught) and have already made their mark in the industry, Dean on stage and Edwin in the movies (he is opening in his fifth, My Father’s War, any day now). The play is a perfect vehicle to showcase their considerable talents and we are greatly pleased to perform here at Pieter Toerien’s Bay Theatre before moving up to Johannesburg for a month. 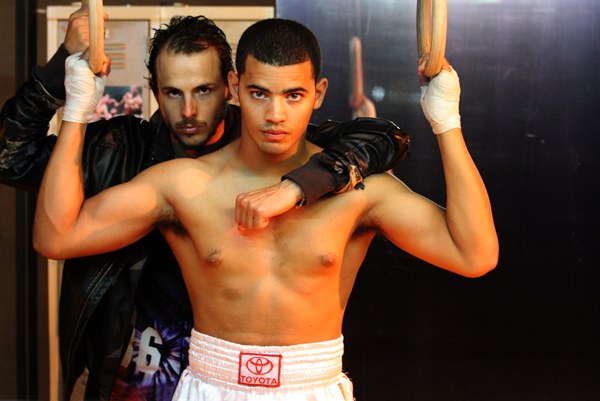 Joseph! Joseph! The media have raved!