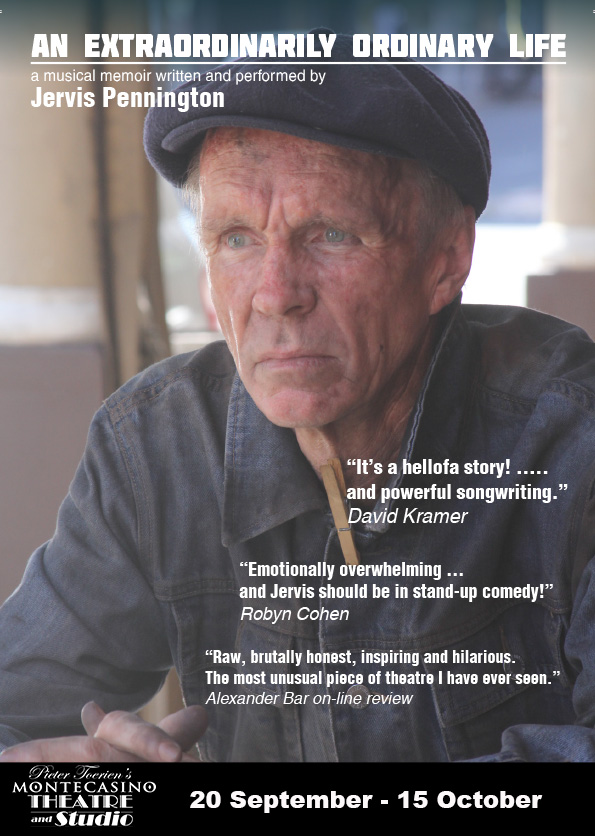 “It’s a hellofa story! …..and powerful songwriting.” David Kramer at The CT Fringe

“Emotionally overwhelming …and Jervis should be in stand-up comedy!” Robyn Cohen: The Cape Times

“Raw, brutally honest, uplifting and hilarious. The most unusual piece of theatre I have ever seen.” Alexander Bar on-line review

In 1983, almost 35 years ago and long before Idols, Simon Cowell and boy-bands, SABC gave us our own National Televised Talent Show ‘Follow That Star’, and it made its winner, Jervis Pennington, an overnight teen idol and household name with his pop group The Soft Shoes and their No 1.song Elvis Astaire. As with many before him, in true rock ‘n roll tradition, this brush with celebrity at an early age ultimately led Jervis all the way down to Skid’s Row. This is that story: fiercely funny, at times raw, always self-deprecating. Jervis, alone on stage with his acoustic guitar, delivers a truly compelling performance: from famous to homeless to fearless!

Please note that there are no disabled facilities for this venue.

The performance runs 70 minutes with no interval

There is no age restriction although the subject matter is of an adult nature.

This performance is in the Upstairs Studio Theatre

There are no disabled facilities for this venue-Stairs to climb

There are great discounts on offer for EDGARS CLUB, DARTS and FANATICS

Great discounts for Groups 10+, Fundraising and Charities. Contact Geraldine on 011 511 1988 or geraldine@montetheatre.co.za

Theatrics Club members pay only R82.50 on the Club Special

Seniors and Students pay R100 for any performance, subject to availability. Only available at outlets

A HANDFUL OF KEYS